By aquaveo on October 12, 2022
Like most other data in Windows, SMS project files save into a directory that can be accessed via the Windows File Explorer. In SMS 13.2, the main project file gets saved with the ".sms" extension and most of the data and model information gets saved inside folders that appear alongside this main project file. The SMS file depends on those other files for the information about the project, and it will be incomplete without them. 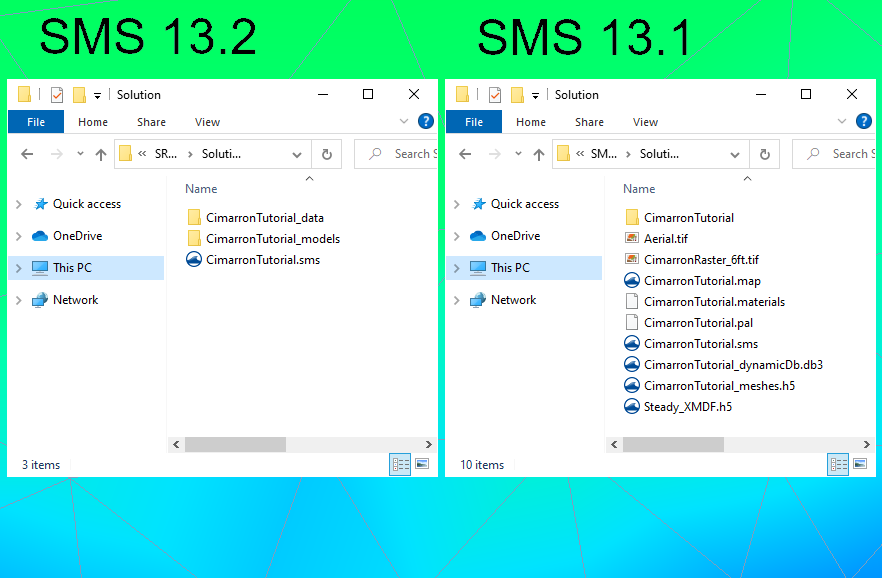 The names of the folders that appear next to the SMS project file depend on what kind of model is being built in SMS. For example, when an SRH-2D simulation is saved, a folder appears next to the SMS project file titled with the name of the tutorial followed by "_models." Additionally, some model will create an additional model folder with necessary components. For example, if a TUFLOW model is saved in the project, a folder named "TUFLOW" appears. For every SMS project file created by SMS 13.2, there is a folder created alongside it that starts with the name of the tutorial and ends with "_data".

The project folder needs every file created alongside it in order to be complete. This means it's essential to move all the files relevant to the project at once. SMS has a feature that "packages" the entire project for you. This feature facilitates keeping the files together when transferring the project to a different computer or a different user. To use this feature, select the File | Save As Package command in SMS. It puts all the contents of the project into a ZIP file that can then be moved to another location. When the ZIP file is unzipped in a different location, all of the necessary components for the project will be present and ready to use.

Now, while most of the data gets saved in two folders alongside the project, there are some files that get saved outside of those folders in the same folder as the project itself. If you are going to move the project without saving it as a package first, then remember to move every file pertinent to the package to the new location. We recommend saving each project in a separate folder to keep clear what information is relevant to a particular project.

Check out the project file organization in SMS 13.2 today!