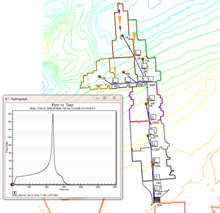 Why MODRAT with WMS?
WMS provides a custom interface to the MODRAT model offering a simple way to set model parameters and a graphical user interface to run the model and visualize the results. Gather background data from a variety of sources from GIS to CAD and access online data from numerous databases of maps, images, elevation, land use, and soil data. WMS allows you to interact with models in true 3D taking advantage of optimized OpenGL graphics and to create photo-realistic renderings and animations for PowerPoint, print, and web presentations.

MODRAT Description:
MODRAT is a modified rational method computer program developed by the Los Angeles County Department of Public Works (LACDPW) to compute runoff rates under a variety of conditions common to the area of Los Angeles, California. The successor to F0601, MODRAT contains all the features of the F0601 as well as updated capabilities for watershed modeling in the Los Angeles area. MODRAT may be used to find flow rates for any watershed with any combination of existing or proposed channels and drains. Further, the watershed may be undeveloped, partially developed, or completely developed. The model will compute runoff rates for a 50-year, 25-year, or 10-year frequency design storm (developed by LACDPW), as well as any other storm which can be represented by a rainfall mass curve. Given any combination of the above variables, MODRAT will compute a hydrograph for each subarea and mainline collection point in the watershed.

Modifications to the Rational Method in MODRAT

As a method of urban hydrology, the rational method falls short in several ways. First, the method does not produce a hydrograph, only a single flow rate. Second, the rational method does not account for changing (time dependent) conditions such as soil condition or rainfall intensity. Finally, results are not very accurate for large areas. Due to these problems, MODRAT contains the following modifications: • Rainfall intensity, i, is a variable dependent on rainfall frequency, storm time, and time of concentration. The variation of i is represented by a temporal distribution curve (rainfall mass curve). • C, the runoff coefficient, varies with soil type, rainfall intensity, and imperviousness. • The time variation of C and i allow the flow, Q, to vary with time, thus producing a hydrograph. The area under the hydrograph represents the total volume of flow from a watershed, a variable which the rational method does not provide. • Hydrographs may be computed for a number of subareas, for each lateral to the main channel, and for each collection point on the main channel. These hydrographs are routed and combined as computation progresses downstream.

The above modifications to the rational method allowed for the computation of storm hydrographs for any size watershed. With such improvements, the modified rational method (MODRAT) has been adopted by LACDPW as the preferred method of hydrologic analysis.