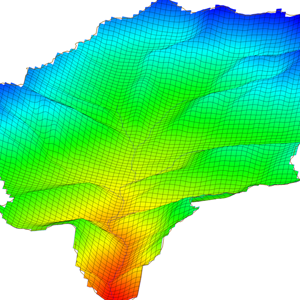 Why GSSHA with WMS?
WMS provides a custom interface to the GSSHA model offering a simple way to set model parameters and a graphical user interface to run the model and visualize the results. Gather background data from a variety of sources from GIS to CAD and access online data from numerous databases of maps, images, elevation, land use, and soil data. WMS allows you to interact with models in true 3D taking advantage of optimized OpenGL graphics and to create photo-realistic renderings and animations for PowerPoint, print, and web presentations.

GSSHA Description:
Developed with the US Army Corps of Engineers Engineering Research and Development Center (USACE ERDC), the GSSHA model is a significant reformulation and enhancement of the CASC2D model. The CASC2D runoff model began with a two-dimensional overland flow routing algorithm developed and written in APL (A Programming Language) by Professor P.Y. Julien at Colorado State University. The overland flow routing module was converted from APL to FORTRAN by Dr. Bahram Saghafian, then at Colorado State University, with the addition of Green & Ampt infiltration and explicit diffusive-wave channel routing. The FORTRAN code was reformulated, significantly enhanced, and re-written in the C programming language by Dr. Bahram Saghafian at the U.S. Army Construction Engineering Research Laboratories (CERL). Implicit channel routing was added to CASC2D by Fred L. Ogden, formerly at Colorado State University, now Associate Professor, Department of Civil and Environmental Engineering, University of Connecticut, Storrs, Connecticut. The GSSHA model has been integrated into the WMS software with direction from the USACE ERDC who continue to sponsor the model and interface.

The principal purpose of the GSSHA model is to correctly identify and realistically simulate the important hydrologic processes in watersheds. The model is intended to simulate different types of runoff production and determine the controlling physical processes in watersheds, i.e. infiltration excess, saturated source areas, and groundwater discharge. Development of the model was directed by the following requirements:

Despite the fact that GSSHA is derived from CASC2D, the formulation of GSSHA is fundamentally different from CASC2D in terms of the way the model updates individual processes in time. The formulation of CASC2D version 1.18b used a short time-step event loop, nested within an hourly evapo-transpiration (ET) loop. In CASC2D simulations, when Hortonian runoff production ceases, the short time-step event loop is bypassed, effectively disabling all hydrodynamics other than evapo-transpiration from soil water. This formulation is not well suited for simulation of non-Hortonian watersheds, because the hydrodynamics of flows in the saturated and unsaturated zones cease to be event based. Rather, these processes continue independent from the occurrence of rainfall. Furthermore, with groundwater discharges to streams, channel hydrodynamics are also required to run continuously. To accommodate the inclusion of continuous processes, such as saturated and unsaturated groundwater flow, the nested-loop formulation of the CASC2D model (Figure 2), was discarded. The GSSHA formulation uses only one main loop (Figure 3). In GSSHA, each process has its own time step and an associated update time. During each time step the update time of each process selected by the user is checked against the current model time. When they coincide, the process is updated, and updated information from that process is transferred to dependent processes. The update time or time step of dependent processes may be modified as part of the process update. In other words, any process in the model can effectively change the time step of any other process. This formulation permits the efficient simultaneous simulation of processes that have dissimilar response times, such as overland flow, evapo-transpiration, and lateral groundwater flow. This scheme also allows a more integrated solution of processes coupled through boundary conditions and flux exchanges. Finally, the scheme has allowed considerable increases in computational efficiency through the use of larger time steps when rates of change allow.