Converting a 3D Dataset to a 2D Dataset

It sometimes happen where you have a fully developed 3D model in GMS and need to transfer a dataset from the 3D model to a 2D model. GMS provides a way to convert a dataset on a 3D grid to a 2D grid. From there the dataset can be exported as 2D data for use in a 2D model.

To acquire a 2D dataset from a 3D dataset, you need the following:

To convert a 3D dataset to a 2D dataset, do the following: 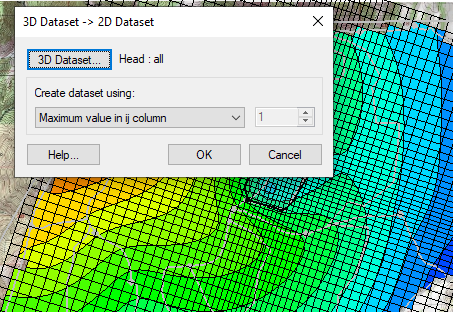 The 3D Dataset → 2D Dataset dialog allows choosing which dataset to converted. By default, the dialog will use whichever 3D dataset is active in the Project Explorer. If another dataset is desired, from a MODFLOW simulation for example, you can make the change in the dialog..

The dialog also allows creating the new 2D dataset using one of the following parameters:

K represents the layer number with 1 being the surface layer, and J and I representing the x and y locations of a cell (or column of cells) in the grid.

Keep in mind that one of the grids could be covering the other so if you want to observe specific data, you may need to turn off other data.

Additional additional information about converting 3D grids to other data can be found on our wiki.