MODFLOW–USG (for UnStructured Grid), was developed to support a wide variety of structured and unstructured grid types, including nested grids and grids based on prismatic triangles, rectangles, hexagons, and other cell shapes. Flexibility in grid design can be used to focus resolution along rivers and around wells, for example, or to subdiscretize individual layers to better represent hydrostratigraphic units.

MODFLOW-USG’s subdiscretization capability to better represent hydrostratigraphic units is an extremely powerful feature. Traditional MODFLOW requires that grid layers be continuous throughout the model domain even if the particular stratigraphic unit ends or pinches out.

Complex unstructured grids can be created in GMS by using the horizons approach. 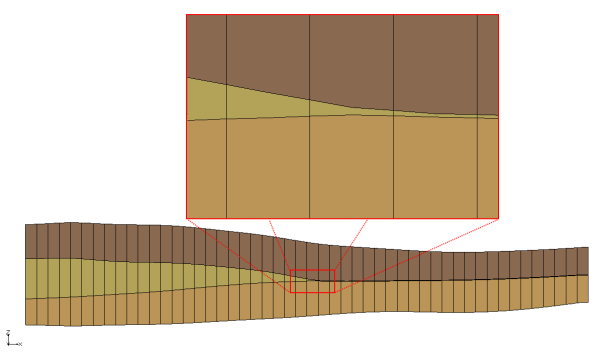 GMS uses a modified version of MODFLOW that can read data from HDF5 files. HDF5 is a binary, cross-platform file format for storing data. Large portions of the MODFLOW inputs are stored in an HDF5 file when creating a MODFLOW model in GMS. Large MODFLOW models are stored much more efficiently using HDF5 (compression ratios of 95% when compared to text files are common). Also, the read/write times are much faster with the binary HDF5 file when compared to text files.

Even though it has been shown that HDF5 with MODFLOW is extremely efficient, many users would also like to have their MODFLOW simulations in the native MODFLOW format. This is particularly true when completing a modeling project and the user needs to archive the project.

Native MODFLOW text files can be saved from GMS. Beginning with version 10.0, these text files also contain documentation comments that more clearly identify the contents of each line in the MODFLOW input file. Further, parameter definitions are also included in the text files.