GMS uses a modified version of MODFLOW that can read data from HDF5 files. HDF5 is a binary, cross-platform file format for storing data. Large portions of the MODFLOW inputs are stored in an HDF5 file when creating a MODFLOW model in GMS. Large MODFLOW models are stored much more efficiently using HDF5 (compression ratios of 95% when compared to text files are common). Also, the read/write times are much faster with the binary HDF5 file when compared to text files.

Even though it has been shown that HDF5 with MODFLOW is extremely efficient, many users would also like to have their MODFLOW simulations in the native MODFLOW format. This is particularly true when completing a modeling project and the user needs to archive the project.

Native MODFLOW text files can be saved from GMS. Beginning with version 10.0, these text files also contain documentation comments that more clearly identify the contents of each line in the MODFLOW input file. Further, parameter definitions are also included in the text files.

For some time GMS has included the capability to use TINs with the Map->MODFLOW command. The next version of GMS will also include the capability to use Rasters with the Map->MODFLOW command similar to how TINs can be used now. In the conceptual model, the user will associate the desired Raster with the Head/Elevation assigned to a point, node, arc, or polygon. When the Map->MODFLOW command is executed the Head/Elevation for the boundary condition is extracted from the Raster using the cell center where the boundary condition is applied. The figure below shows how/where the Raster can be assigned to a point/node/arc/polygon. 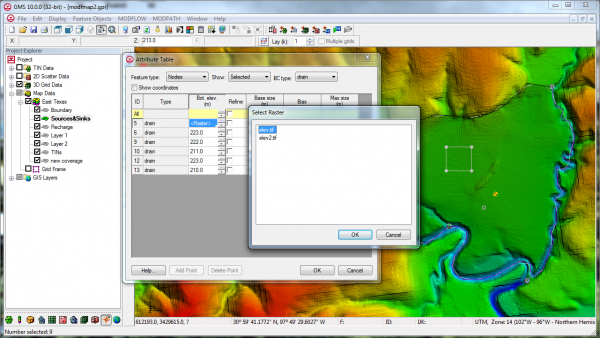